Whenever you’re up for some awesome free Valorant skins, Freecash is the most trusted source that offers you unbelievable choices, every single day! Together with Freecash, you can also earn instant cash too, so join us now for some exciting prospects coming your way!

Get your Valorant Skins Now 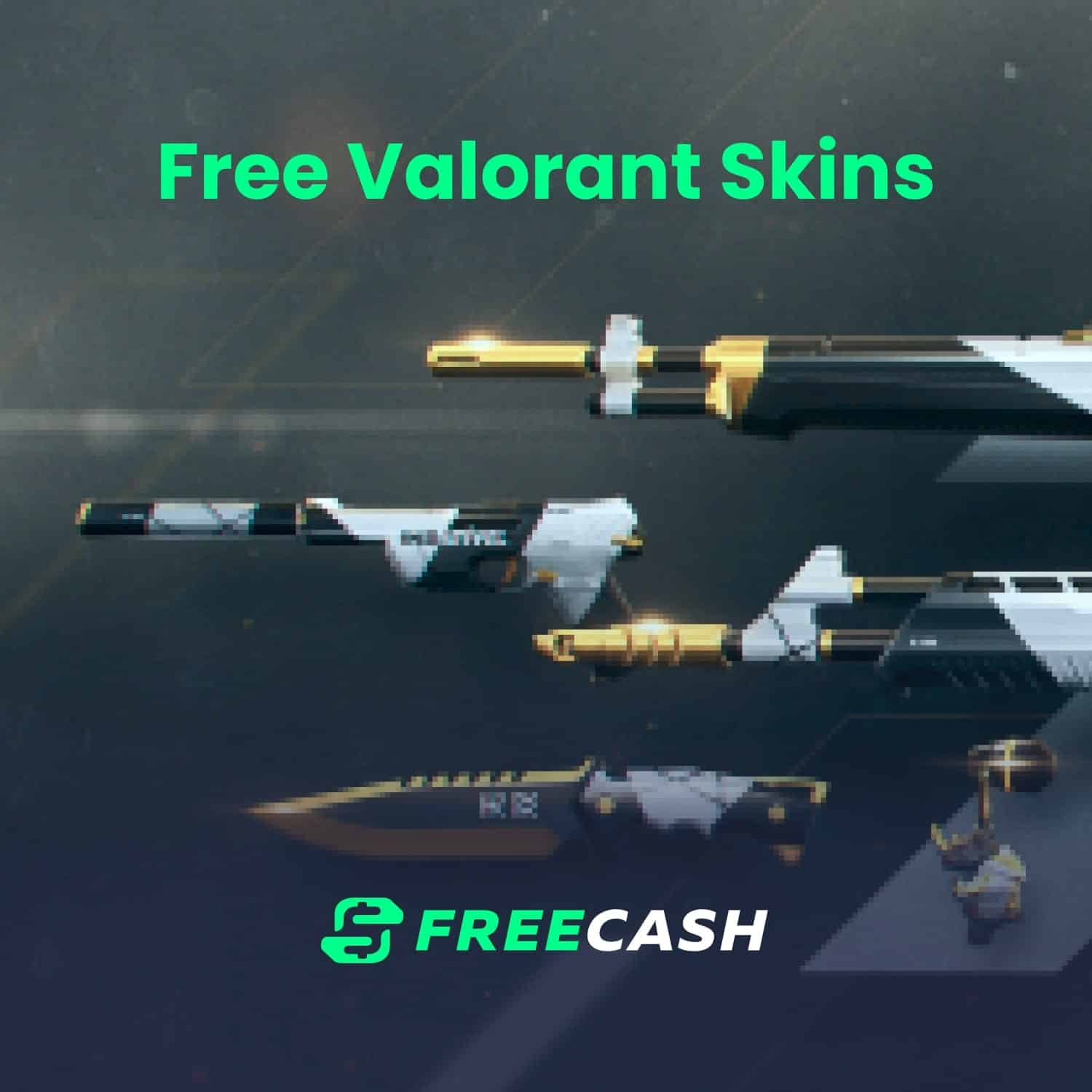 Equipping incredible weapon skins in Valorant not only makes you look like a badass, it also makes you PLAY LIKE ONE TOO! If you ever wondered about how to get free skins in Valorant, then Freecash offers the most easy-peasy methods for you to do so here: Login through our site

Register an account with Freecash by pressing the ‘Register’ prompt at the top-right corner of the page, or you can also link your Google account or Steam profile instead. If you’re already a registered user, just click on ‘Login’ to start using Freecash’s features immediately. Here, you can start earning Coins by selecting the specific offers to complete or surveys to participate in.
Step 2

Now you can open the Earn Page and complete offers. We recommend the offers at the top of the page. After earning enough Coins, proceed to the ‘Cashout’ tab at the top of the page as well. You can use your collected Coins to convert them into real-world money or cryptocurrency, exchange into gift cards, or unlock your favourite skins instantly!

Get your Valorant Skins Now

What exactly are Valorant Skins?

Valorant skins are exclusive aesthetics that change the appearance, audio and even animations of the current weapon that you are using, making gunplay that much more fun and exhilarating!

Skins are not essential to winning matches or improving your skills, but when you’re rocking a flashy Vandal or an intimidating Knife, you will definitely FEEL the difference.

Want to acquire some of them for free?

How to Acquire Valorant Skins?

Due to their rarity and special in-game components, there are only a few ways for you to obtain these extraordinary cosmetics inside your own game.

Here are the current methods to do so:

So far, these are the only ways for you to acquire Valorant skins directly from the game, but there are certain VP ‘generators’ out there that may create exploits for you to farm VP quickly too.

Word of caution, though; these ‘generators’ are considered illegal within the game and may lead to bans if you are caught in the act!

Need another easier and safer alternative?

Join us at Freecash right now to start collecting Coins for you to redeem Riot Skins to exchange into VP without any hassle!

⚠️ Read also: How to get Free CS:GO Skins

If you are pulling your hair thinking about how to get Valorant skins for cheap prices today, then Freecash has you covered!

At Freecash, here is what you need to do to start collecting VP, absolutely free:

At the home page, click on ‘Login’ to open up your Freecash account (can also be linked to your Google or Steam profiles).

After logging in, go to the ‘Earn’ tab at the top of the page to be directed to a new page filled with many wonderful opportunities to start collecting Coins:

🔺 Once enough Coins have been accumulated inside your account, proceed to the ‘Cashout’ tab at the top of the page.

🔺 There will be three (3) different ways for you to convert your hard-earned Coins here:

🔺 Choose your specific in-game region (IMPORTANT!) and change your Coins into Riot Coins by opting for any of the bundled gift cards provided on the screen.

🔺 For reference, there are four (4) different Riot Coins Gift Cards for you to decide upon here:

🔺 Click on ‘Withdraw’ if you have decided on a particular Gift Card amount to redeem.

🔺 You will then receive a Riot Point Pin/ Code via email or Steam message to use in Valorant.

What are you waiting for?

⚠️ Read also: How to get a Free Minecraft Account

Ways to Get Different Skins in Valorant

In Valorant, there are many types of weapons that are available for you to choose from, and each has its own skin variants as well.

To note, there are three (3) places for you to find the specific weapon skins that you want, but every skin will only appear randomly under a time-limited window, each being:

⚠️ Read also: How to get Free PUBG UC

Here are some examples of how to unlock skins in Valorant:

Weapon skins do not stay indefinitely in the Store, so the only ways to obtain a specific Knife skin are by:

🔹 Purchasing its dedicated skin bundle whenever it appears under ‘Featured Bundles’.

🔹 Instantly buying the skin if it appears under daily ‘Offers’.

🔹 Hoping to get lucky whenever the Night Market is up in the game.

Categorized as its own skin ‘family’, ‘Prime’ skins can be redeemed by way of:

🔹 Buying the bundle once it appears under ‘Featured Bundles’, usually at a discounted price.

🔹 For specific weapons (e.g. Spectre), you will have to wait until its ‘Prime’ skin appears under ‘Offers’.

🔹 May also appear as a random selection inside the Night Market.

Similarly, you can also acquire ‘Prism’ skins by:

🔹 Purchasing its bundle under ‘Featured Bundles’.

🔹 Wait until a specific ‘Prism’ weapon skin is showcased under the daily ‘Offers’.

🔹 Visiting the Night Market once it appears in-game.

As you can see, skins are extremely rare and valuable in Valorant, and they are not always available for you to buy all the time.

That’s why you need to be ready with sufficient VP whenever your desired ones pop up inside the game, and what better way to do that than by farming Coins with Freecash today!

For new players, a summary about how to get skins in Valorant is always very helpful, so here are some quick insights for you to find your way around in the game.

As a start, there are two (2) different in-game currencies that are used for buying cosmetics in the game, which are:

While VP can only be bought using real money – unless you use Freecash! – RP is redeemed by way of Agent Contracts, Battle Passes and even using VP too.

⚠️ Read also: How to get Free Riot Points

Once you have enough VP stashed up, here’s how to buy weapon skins in the game:

1. Purchasing skins from the Store

4. Farming other real-world currencies to exchange into VP

To avoid all the unnecessary stuff while also caring for your wallet too, opt for Freecash to start racking up those Coins right away!

Unlocking Skins in Valorant (without Buying)

In Valorant, there are extremely limited amounts of weapon skins that you can unlock just by playing the game, not needing to spend a single penny at all.

However, a vast majority of the best Valorant skins are only obtainable by using VP, but if you’re up for some grinding instead, then Agent Contracts is the only way for you to unlock weapon cosmetics through dedicated playing hours:

Better go with the Freecash way, don’t you think?

Nowadays, weapon skins have become a normal thing in Valorant, and if you’re still sporting the default designs and aesthetics, you’ll look quite outdated and considered a noob from the very get-go!

Who knows, in just a matter of days, you might already be dancing around on the map with a rare ‘Tigris’ Phantom in hand.

Trust us; with exclusive weapon cosmetics in tow, fragging opponents has never been more satisfying before!

How do you unlock skins to upgrade in Valorant?

Nevertheless, if you are wondering about how to unlock skins in Valorant with Radianite Points (RP), there is currently no such way to do so because RP is used as the currency to upgrade the weapon skin levels accordingly, allowing the skin to produce special audio, effects and animations respectively (not to buy new skins).

Here is how you upgrade your weapon skins using RP in Valorant:

Essentially, all Valorant skins are NOT pay-to-win, even if there are certain players who argue that that is not the case.

All cosmetics do not change any hitboxes, stats or other competitive components of the particular weapon, making all of them safe for competitive play as well.

Are there codes in Valorant?

Yes, there are time-sensitive codes that the developer, Riot Games, continues to share with the community.

These codes are usually given out via social media and streaming platforms, and they are mostly confined to Player Cards for you to display on your profile.

Weapon skins are not given out through redemption codes, unfortunately.

Where do I get a Valorant code?

Other than that, gaming media outlets like Ginx and The Loadout also proactively post these codes onto their websites as well, so always be on the lookout for those!

How to get free Valorant accounts with skins?

If you wish to skip the entire grind and buy another player’s account that is already complete with its own collection of weapon skins, here is how you can do that;

Bear in mind, different marketplaces may have different procedures in place, but in general, the above steps demonstrate how the usual account-buying practice is done.

How to get Free IMVU Credits

How to get Free R6 Credits

How to get Free Robux Gift Cards

How to get Free PUBG UC