How to get Free CS:GO Skins

Get your CS:GO Skins Now 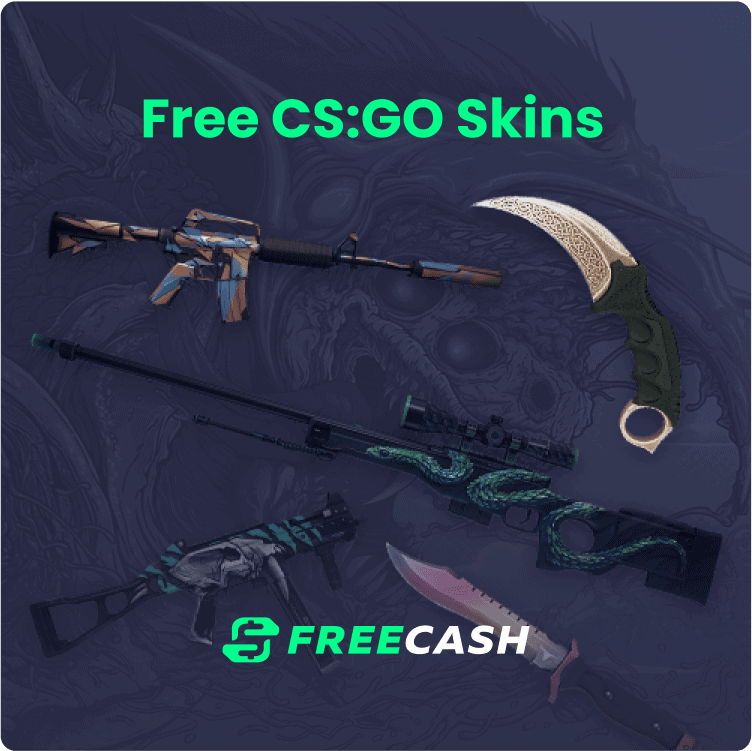 You can complete surveys, watch videos or download apps to earn coins. Some offers require a mobile phone, some offers can be done on your PC. After you earned enough coins to withdraw, you can navigate to the withdraw section, click the Bitcoin Button and withdraw directly to a BTC address or to your coinbase e-mail.

Login through our site

To earn free bitcoin, you first need to make an account on our website.
This can be done by simply logging in with Google or Steam
and accepting the terms of service.
Step 2

Now you can open the Earn Page and complete offers.
We recommend the offers at the top of the page. 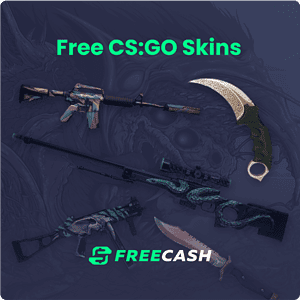 After you have earned some coins you can click on "Shop". This is where you can exchange your points to CS:GO Skins that you can use right away. We charge no fees withdrawals, and your code will arrive within several minutes.

Get your CS:GO Skins Now

Skins are an essential element of Counter-Strike: Global Offensive, Valve's contemporary shooter that pioneered team-based action gameplay when Counter Strike was originally released 20 years ago as CS 1.6. In-game skins, despite the fact that they do nothing but look gorgeous and increase your skill to superhuman levels ;), are incredibly popular and rather pricey. Some people even use them as an investment. So, who wouldn't want to get some of those sparkling CS:GO skins for free? And that's precisely what we're offering here at Freecash!

How do I get my Free CS:GO Skins using Freecash?

All you have to do for free CS:GO skins is sign up for a Freecash account, fill out a few paid surveys, view videos, or complete offers and rapidly exchange your earned points for CS:GO skins. You can purchase Steam Gift Cards, BitSkins Account Balances, SkinBaron Gift Cards, Skinbay Gift Cards, and a variety of other goods that lets you exchange your Freecash Balance for CS:GO Skins!

Freecash.com is a website that connects companies and consumers in an effort to advertise their products, apps and surveys. Users can choose from featured tasks at the top of each page such as completing 5 levels within 2 days or downloading an app for $4 worth of coins which they can cash out using PayPal, VISA cards, Bitcoin & many other gift card options.

We are working with over 100 advertisers, and give our users the possibility to earn money by performing simple tasks like downloading certain apps or answering survey questions online. With 1000 points equal to one dollar, you are able to use these rewards on your Free CS:GO Skins along with many more options.

What can I do with my free CS:GO Skins?

The most basic application is to equip your CS:GO skins on your avatar and utilize them in-game to dab on the dead bodies of your enemies! Besides that, you may also trade them with other players using Steam's integrated player-to-player trading system. A different option is selling your Skins on the Steam Marketplace, so that you can use your gained Steam Wallet Balance to purchase new skins or games. Do you want to receive real money when selling your Skins? That's possible as well by using third-party marketplaces which let you cash out your profits via PayPal, bank account balance or Bitcoin.

Counter Strike: Global Offensive is the fourth game of the Counter Strike video game series and was released on August 21, 2012. It was created by Valve Corporation and Hidden Path Entertainment and is primarily played on PC and Mac, although it was released on Xbox 360 and PlayStation 3 as well. In the game, two teams compete against each other: the Terrorists and the Counter-Terrorists. Both groups are required to destroy one another while having different objectives. In the most commonly played game mode, the terrorists need to plant a bomb at one of the 2 bombsites and defend it until it explodes. The Counterterrorists muss prevent the bomb from being planted or defuse it. Counter Strike: Global Offensive was praised by critics for its gameplay and resemblance to predecessors on release. Since its release in 2012, CS:GO has drawn in up to 11 million unique players per month, which is complemented by a great and active competitive scene. Valve themselves sponsor multiple tournaments every year, with other e-sports organizations joining in. The game was transitioned to a free-to-play model in December 2018, with Valve focusing on revenue from cosmetic items like skins and stickers.

How Do Online Surveys Work

The 10 Best Weekend Side Hustles You Can Do

How you can make Money downloading Apps!

How to make money on Freecash?
Freecash.com works together with companies that want to advertise their apps, surveys and products.
A task could be: Download an app and reach level 5 within 2 days to earn 4000 coins.
To get started choose an offer or survey. We can recommend the featured offers at the top of the Earn page. These tasks are very simple & many people have already successfully completed them in the past.
After you have completed a task you will get coins. 1000 coins equal $1.00. You can cashout the coins for PayPal, VISA cards, Bitcoin, CS:GO Skins, Amazon gift cards & multiple other types of gift cards.
How much money can you really earn on Freecash?
It is easily possible to earn more than $100 per month on Freecash, some users even reach $1000+ each month. You can check out the Leaders, to see how much the most active Freecash users earn.
How long does it take to cash out your money?
Freecash.com has a live support that is always online. Our team is working 24/7 and you can contact us any time at the top of the chat. If you request a withdrawal, it will most likely get approved in less than 2 minutes.
How to get free CS:GO Skins in 2021?
Freecash not only enables users to earn free money, you can also withdraw CS:GO Skins completly for free. We offer a huge selection of CS:GO skins that you can withdraw to your steam account and trade with other users. Freecash is perfect for you if you want to have cool skins but you don't want to spend any money on CS:GO.
You can complete surveys, download apps and play games to earn coins. Use the coins to withdraw free CS:GO Skins from our instant CS:GO Skin store. CS:GO skins can be sold for real money any time, so you are literally earning free money with Freecash.com!

A list with all the advantages and features we have, that made us become the best website to make money online in 2021.

Cashouts starting at $0.01 - Cashout whenever you want!
Sign Up Now!